So I have fallen a little behind in writing to this blog.  We had a couple of family issues come up and frankly it is hard for me to be creative when I’m worried about my kids.  I think things are better now so hopefully this will be updated at least weekly again moving forward.


We planted the garden for the neighbors in June on the front walkway by the street.  Since it went in a little late our choices were a bit limited and we ended up putting in watermelon, yellow squash, zucchini squash, pumpkin, eggplant, tomatillos and jalapeno peppers.


Right away we started getting neighbors who we already knew and a number that we did not already know asking us what we were doing.  When we explained that we had learned this concept that we thought was cool and that we were following it by planting a garden for the neighborhood the opinions were unanimously positive.


About a week after we noticed the first squash had disappeared I was out watering one morning and a car drove up the street adjacent to ours; I thought nothing of it until it turned around and pulled in front of our house.  The young gentleman driving rolled down his window and thanked me for planting this and said that he and his wife took the squash while on a walk the other day and they loved it.


We maintained the garden throughout the summer, talked with neighbors occasionally and learned that we have some really cool neighbors who really like that we’re growing this garden “just because”.  I learned that one gentleman who often walks with his wife and their beautiful dog; yes we’re dog people, is on the school board for the district that our kids attended and he asked me to talk with him if I ever see anything that needs fixing.  I don’t know how important that is at this point but I thought it was rather cool to get that conversation going.  Another woman who lives on one of the side streets in our neighborhood stopped by and told me that she is planting fruit trees in her front yard and everyone should be doing things like this.
It’s just cool to hear the positive feedback from so many sources.  My favorite was my next door neighbor’s mother introducing herself, mentioning that she uses our jalapeno peppers all the time when she visits and she asked me if we like grapefruits.  I said of course, she said she had a tree and a couple days later a big bag of ruby reds were on our porch; I love this stuff! 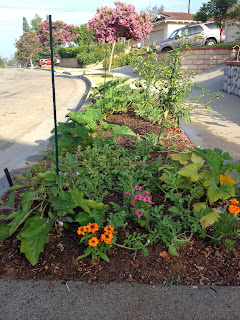 Right now most of the garden is comprised of a couple of pumpkins.  The jalapeno peppers are doing well but have slowed in production of late but we have mild winters so like my other peppers in the back and closer to the house in the front yard they should be perennials here and just produce more and more year after year.  When the pumpkins mature in a few weeks we have a bunch of seedlings going for our “winter” if you want to call it that garden.  Kirstin and I have lived outside of Southern California and to say we get a winter here is a joke…